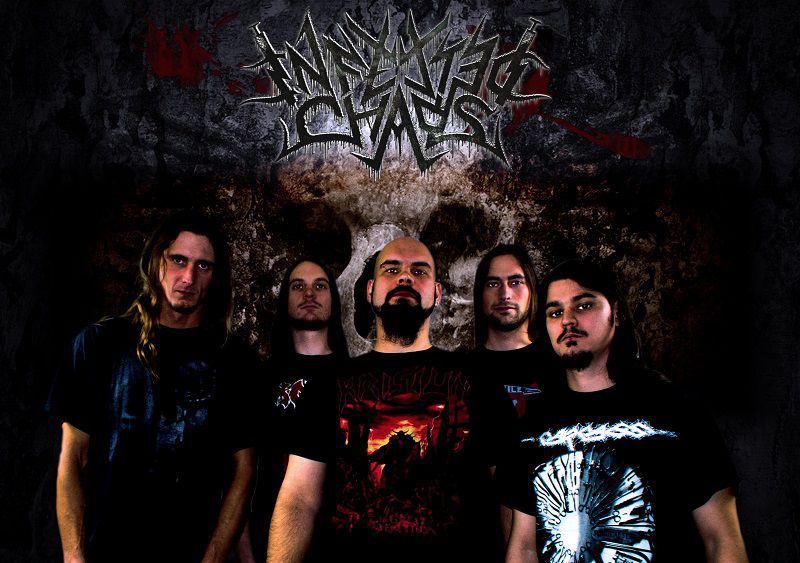 The band was founded by the remaining members of passed away band Chaosreign, Matt, Martin and Flo in summer 2013, who wanted to give birth to the already existing songfragments. The line-up was completed by Christoph on drums and me, Christian, on vocals. We knew each other already long before and that was just the perfect moment to create something together. We just wanted a powerful name that´s easy to remember. It has no special meaning. It just had to sound like death metal! But in the end it runed out, that the name is quite matching as we seem to be surrounded by chaos all the time, hahaha.

We´re all between our mid-twenties and end-thirties. I can´t really answer for how long everyone is playing his instruments. When we met each other everyone was already playing for a long time. Martin (git) for example is a former member of the legendary Graven. Our bassist Flo plays the drums for Wormcluster, Christoph is beating the shit out of drumsets also for Preterior and Infestus. Matt (git) also had different projects running just as myself. But right now I´m completelly focusing on Infected Chaos.

The instruments were all recorded by ourselfs, mainly by our guitarist Matt in our rehersal room. He studied this and knows just what to do. Our bassman Flo recorded his bass at home and my vocals were recorded by Matt and a little help by our good friend Cook in his small studio in Tyrol. For mixing and mastering we headed for Iguana Studios in Freiburg, Germany where Christoph Brandes did a fantastic job. Thanks again for your work! You breath metal!!! We are still extremely content with our debut but already found some things to improve. I guess a passionate musician is never ever completelly satisfied and should stay hungry.
We produced 600 copies. Some of them were sent to magazines all over the globe and the rest we try to sell at our gigs, via facebook, bandcamp, etc. Just look for it on the internet. It´s price is about 8,-- €.

I don´t really know why I sing in English. As always when I make music its a matter of feeling, without too much thinking. Maybe I´ll write some lyrics in other languages for future songs as I´m very interested in languages. The lyrics were all written by me and are very important to me. The main topics on The Wake of Ares are suppression, greed and the rebellion against it. Therefore I created the fictional underground movement Blooddawn Resistance and their iconic symbol that is the ancient god of war, Ares. In the world we live in we have to bow to a so called elite and that´s not the way we want to live. We are all controlled but should be our own leaders.
Yet some songs don´t deal with this subject. These are “Ninth Circle” which is just about dying, “Code of I.C.”, a song that shows our love for true death metal and “Awaking into Nightmare” which deals about some hard times I personally had to suffer in the past few years.

Our logo was drawn by Christophe Szpaidel and Nino R. Meija. The fantastic cover and the rest of the artwork for the album was designed by Phlegeton of spanish death metal band Wormed. Check out his work and his band! You won´t regret, I promise!
In our eyes these things are very important. You have to offer the complete package, harmony of all components to create this special feeling death metal is made of.

I cannot name specific bands here. Everyone in the band has his own favorites. We mix these influences and the result is Infected Chaos. Of course one cannot deny there´s a certain affinity for crushing, straight-to-your-face-death-metal, hahaha...

The recordings were sent to many labels. Some were interested, some had their rosters already completed and others – the bigger ones – just didn´t answer or sent a standard response wishing us good luck for the future. We were signed by an Austrian label finally, but it went bankrupt and the owners just disappeared. We got signed by another Austrian label fast, but there the same thing happened. That´s awful. Fuck you guys!

We did about ten shows up to date and they are all special to us. No matter if in small clubs or at a festival. A total blast was our second show... We had the chance to open for legendary Possessed! It was very inspiring to share the stage with these guys!!!

We already played in Germany, Austria and Italy but are of course always interested in spreading our music all around the globe! Playing live for the real maniacs is what being a metal musician is all about!

Gigs, gigs, gigs!!!
And we are currently working on songs for our second album and maybe we will produce a clip for one of the songs from The Wake of Ares! Stay tuned!

Cheers metalheads, see you on the road!!

And thank you Pavel for doing this interview with me!! 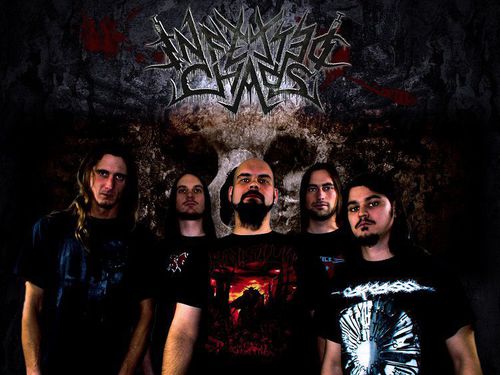