ENTRAPMENT – Mainly I’m just messing around on my guitar, after a while I end up with some useable riffs.

The quitarist and vocalist Michel Jonker from ENTRAPMENT revealed lots of interesting stuffs about this dutch underground death metal band. 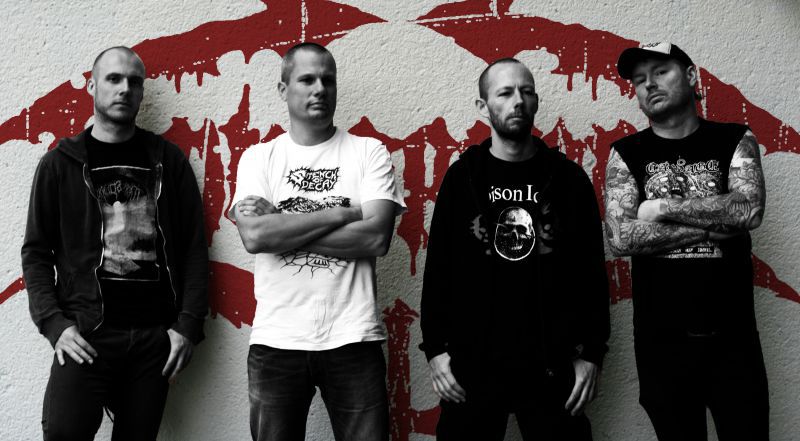 Ave ENTRAPMENT! I tried to find some information about your band on the Czech metal webzines. I didn’t find many.  It’s necessary to correct it now. Can you remember your beginning, history and please introduce the group.

ENTRAPMENT started as a project around January 2010 by me. Actually I didn’t wanna play in a band for a while since I was to busy with other things.

Detest Records picked up the first songs I recorded and they released it as the „Infernal Blasphemies“ demo tape. I recorded another 3 songs and released the „Putrefying Stench of Death“ demo tape by myself.

In 2011 Detest Records released the „Crawling Morbidity“ 7” and we played a handful of shows like Wolfsbane Festival and Killtown Deathfest. In 2012 we signed a deal with Soulseller records and recorded „The Obscurity Within“. In 2013 we did a split with PYRE on Soulseller Records, played great shows and did a tour with MASTER throughout Scandinavia. only released on vinyl. And in april 2014 Soulseller released our latest album „Lamentations of the Flesh“.

When I was looking for the information about your band, you Michel were mentioned as the main composer and the only one member of ENTRAPMENT. Does it mean that ENTRAPMENT is just your project/band and other members play live-shows only? In the last interviews you are said as „ the whole band“. So tell us how it is?

I’m writing all the songs so far and it seems more in handy that I also record the songs in the studio..altough we’ve got serious plans to cooperate more when we will record our 3rd full length.

Where is the name of the band coming from? I read somewhere, it is on the basis of the song from the Dutch band SOULBURN (the project of musicians from ASPHYX – the song „Hellish Entrapment“), is it true? And what about the logo? Who is the creator? It resembles me a little bit the logo from DISMEMBER.

Yes you’re right, I took the name from the SOULBURN song. Not from the movie nor the ENTOMBED song Blessed Be haha.

I drew the logo around the same time as I wrote the first songs…I had no intentions to release anything so I wasn’t too serious witht the logo. Now I have to admit it looks a lot like DISMEMBER . But hey, they don’t exist anymore and it’s a killer band so who cares.

Your last album „Lamentations of the Flesh“ is out from May. What is the feedback from critics, fans, how do the new songs look like on gigs? If you compare the new record with the last „The Obscurity Within…“, what way did ENTRAPMENT move? Describe the “differences” between both records.

Most of the critics write about the fact that the songs on „Lamentations…“ are much more mature then on the first album and that was exactly my intention so im really happy with the result .
The main reactions on the album are really positive.

My review to your last record „Lamentations of the Flesh“ was published, when the cover of the album was “original”. After that it was changed. Why? I personally like the new one more. Who did it create?

We had to deal with a deadline and we couldn’t make it with the original artwork so I had to fix new artwork. The church is based on some pictures I made during my holidays. I like to visit old cathedrals.

The lyrics by some death metal bands complete the music only. What about ENTRAPMENT? Do you want to tell any message, ideas? Who are the lyrics writers and what are you singing about?

The lyrics deal with religion from all kind of aspects. The fear of life, the fear of women, the will to power etc. They are based on my personal point of view.

I like the sound of the new album. It can be said, both your last records sound like coming from 80th or 90th. Where did you record and who made mix and mastering? Was it your goal to move closer to an “old” sound? Do you have any favorite record that you like so much that you want such a sound by ENTRAPMENT?

First album was recorded at Perimeter Audio by Marc van Duivenvoorde. „Lamentations of the Flesh“ was recorded by Richard Wierenga, he also recorded the first 2 demo’s. It was the idea to make it sound oldschool and we pretty much succeed.

„Lamentations of the Flesh“ was published by the Dutch label SOULSELLER RECORDS. Why just this label? The record was published as CD digi-pack and as 12’ vinyl. An “old” music and an old medium go together. Do you like and collect vinyl? There are some bands claiming they sell more vinyl than CDs. And what about ENTRAPMENT?

I was a vinyl collector but I had to back down a bit haha. And yes we sell more LP’s than CD’s. I think the underground scene is crowded with collectors and most of them aim for the vinyl and the ratities.

Michel, when did you start to play the guitar and sing? If I’m not wrong, you were playing drums in your ex-band ABSORBED just as in MASSIVE ASSAULT. I can’t imagine first I’m sitting “hidden” back on the gigs and suddenly I’m standing in front of the microphone. Did you have anytime problems with it?

I started off to play bass, then drums and I ended up playing guitar in a crust metal band. So I had some experience throughout the years. But vocals and guitars on stage was a new experience ..and it took me a while to get used to it. Now it think it’s great…you really enjoy the energy of the crowd.

How do the new songs of ENTRAPMENT come into being? I’m interesting in the process itself. Where do you find inspiration? I can’t fancy it.

Mainly I’m just messing around on my guitar, after a while I end up with some useable riffs. I record these into my little studio on my PC and then I build up some digital drums around it and add some extra guitar leads etc. That’s how it goes.
In the end I;m stuck with shitloads of songs and then I pick the best ones for the studio.

You will have the tour with legendary MASTER in November. I think it isn’t your first common tour. I personally noticed you first, when I saw your T-shirt on Paul Speckmann a few years ago. You perform mainly in smaller underground clubs. In our republic there are only a few people coming, they would like to sit at home on the Internet.  What are your experiences? Do the fans in the Netherlands visit gigs?

Depends on which bands are playing. The later underground death metal scene didn’t really reach the Netherlands sadly. But big bands like ENTOMBED or IMMOLATION attract a lot of people to their shows for sure.

What records from the last time are you interested in? What about your opinion to the last GRAVE, ENTRAILS, AUTOPSY, VALLENFYRE, ASPHYX, HAIL OF BULLETS etc? Do you collect music?

Yes I collect music but I have to admit that I’m only familiar with the last ASPHYX , AUTOPSY and ENTRAILS albums. I’m more digging into bands like MORBUS CHRON, TRIBULATION, VANHELGD, BOMBS OF HADES, INCARCERATION etc. etc.

Is there any band which you’d like to make opening act on the tour? It is usual that „a less famous“ band pay the tour for themselves and a more famous group take them with. Are you planning thing like that? I can imagine an European tour ENTRAPMENT with GRAVE or ENTOMBED etc.

Not really, and we’ve got no budget to buy ourselves into a tour. And for now we’re more focused on the underground scene.

In 2010 – 2011 you were recording some demos publishing in the compilation „Irreligeous Abominations“ by label Godeater Records. Unfortunately, I can’t buy this CD up to the present. It is possible to get it? Or will you publish it again?

Godeater Records is vanished from the earth it seems like. Very sad. We’re also in need of that compilation. But there’s plans to release it on LP. Probably next year.

Many bands have a special opinion on downloading from the Internet. What about you and illegal downloading of music? Almost every album is on the Internet on the day of issue. This can be advertising for someone and the other one is fighting against it. What is your attitude to this?

Well, we’re a small band and our scene is based on “freaks” and collectors. Most people download the stuff first and they buy the cd or lp later. I have no problem with that. I don’t think you can stop the internet.

I don’t know so much „young“ bands from the Netherlands playing old school death metal. It occurs to me BODYFARM only. Can you suggest any?

NAILGUN MASSACRE, VILLAINY, ANARCHOS to mention a few. All play a different style which is typical for the dutch Death Metal scene. There isn’t a particular Dutch style.

What do you, as a band, think about reviews and reports from gigs etc? Are these points of view important for you? Do you read and find out „opinions“ on your music on the Internet?

I always check the internet on reviews. I work my ass off to create an album and so it’s also important to read about what other people think about it. When the review is bad I have to bite my tongue though haha but that’s life.

Do you know and listen to any groups from the Czech Republic?

Old bands yes (KRABATHOR, MASTER´S HAMMER) but newer bands from the last 5 years ..not really to be honest.

Do you want to tell anything to your fans, promoters, label etc?

Thanks for the support so far!

What about ENTRAPMENT’s plans for near months?

Doing a few shows with BOMBS OF HADES from Sweden. The tour with MASTER. And some loose shows. We’re looking forward to it!!!

Thanks for the interview and wish you lots of crazy fans and loads of sold records.

Thanks a lot man!! Cheers!

REVIEW Lamentations of the Flesh (in Czech) 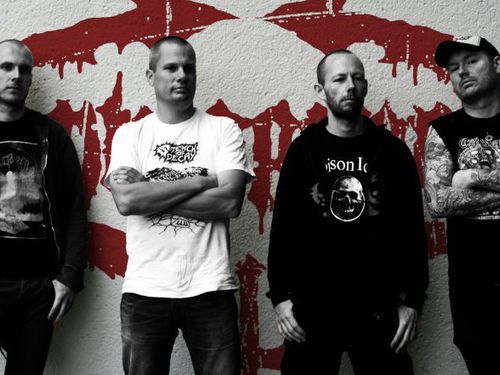 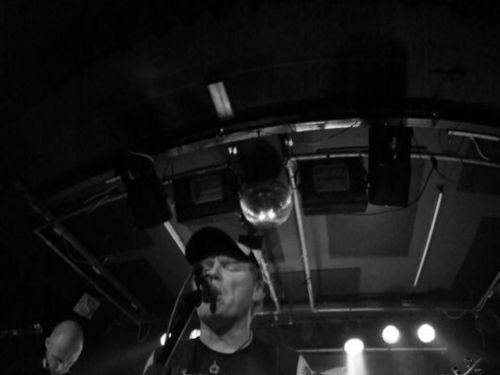 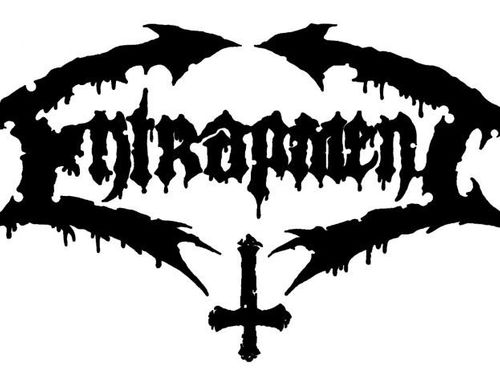 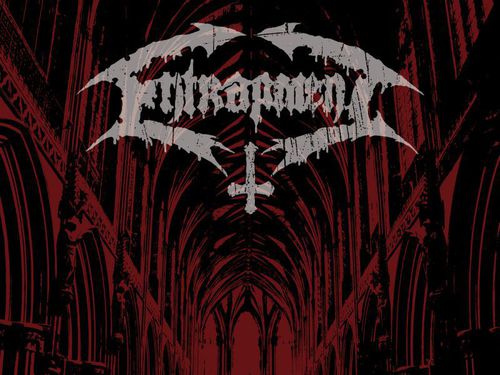