SICKENING HORROR – Exploration of the self through musical exploration could be our motto. 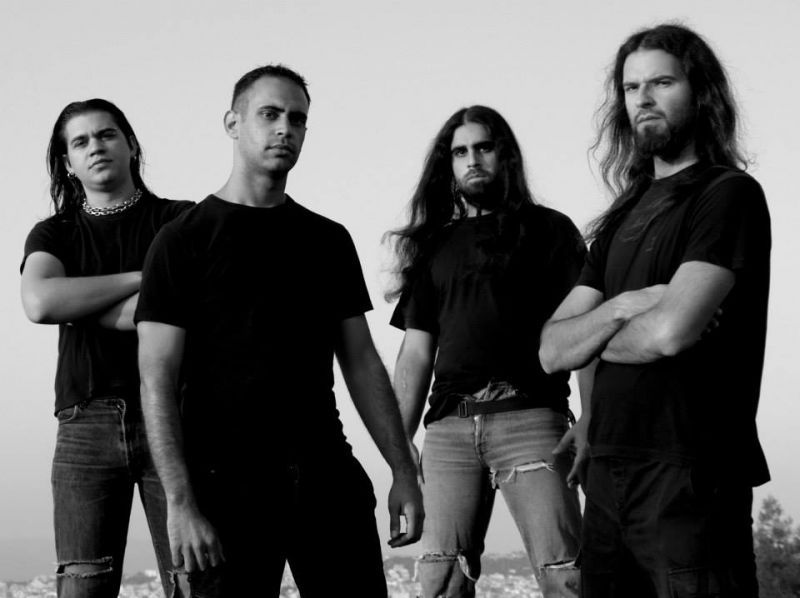 Hi, Firstly I must congratulate you for creating such a great album namely "Overflow“  which was released this year, that is after six years since the last album "The Dead End Experiment“. If I remember correctly, the material on "Overflow" has been prepared since a long time and the delay was due to finding a publisher . Is this information correct ?

Hi Prepil and thanks for hosting us at Fobia Zine. You are right, our new album „Overflow“ took us quite some time to complete it. However, this was not due to searching for a record label. We managed to agree with Deepsend records about its publishing quite quickly. The reason of the delay was mainly that we did everything by ourselves this time and we took our time to do it perfectly according to our standards.

You released the album on Deepsend Records. Every album was released by a different record company - How did the cooperation with Deepsend Records take place, and are you satisfied with their work? Are you still working with them?  I could not find you on the current list of artists on the label.

Deepsend records approached us fast and with a concrete plan about the release of the record, so we made the deal with them. So far we are satisfied with some things and not so satisfied with others, like for example the promotion of the album. We had a one-record deal with Deepsend, which was valid for the release of „Overflow“.

Every album of yours has a different publisher as well as a different drummer. What is the reason behind nobody staying with you? (joke) Have you ever regretted the fact that George Kollias went to NILE and what about Jose Theororakis , what is he  doing now?

Haha, I guess it is because of our cheesy feet! :D Well, it is just how things worked out for us. We started the band with George Kollias but then some disagreements led us apart, which I think was the best for both sides. Jose did a great job at the „Dead End Experiment“ album and we had a great tour with him, we couldn’t just stick with him. Not sure about his whereabouts at the moment.

Andreas Karayiannis and Vasilis Antipatis are a long time members of your band.... What was the criteria during their selection and can it be said that this assembly is stable and final?  Are you going to violate your tradition and record another album with the same group?

Vasilis replaced Jose but was not a new person to our family. Me, Vasilis and his brother George were the members of an early version of Sickening Horror called „Serial Killer“. Therefore, we are musically binded since then and we really know each other very well. He is an excellent drummer and a great person to work with! Andreas was the person to complete the puzle and contributed a lot both music-wise, as well as production-wise. He was the sound engineer of „Overflow“ and did a phantastic job!  You are right, we have a perfect line-up for the moment and don’t plan to change it.

Back to the main topic – album „ Overflow“ At first listen I was a little shocked, because it sounded little different than I would expect from a follower outstanding "When Landscapes Bled Backwards" and "The Dead End Experiment". Finally I found a way to it and „eventually took my hat off“ but I have to ask – obviously you have calmed down your music that you have ceated with much more clearer, and more understandable and seemingly simpler material, which is able to bring an unique atmosphere not only due to the original work but with melodies and harmonies. How old are the songs on „Overflow“? And most important – what caused this change of style?

Thank you for your kind words. Your remarks are to the point, “Overflow” offers far more mature compositions than our previous two records, that come as a result of a thoughtful process. We have immensely matured through those years and at this record we made a step forward with our music. We wanted to make music which has more depth in feelings and structure and is musically more complete. This is why we took our time with composing, as well as producing this record. We experimented a lot with new ideas, new instruments (e.g. piano) and recording possibilities in “Overflow”. It took us three years of work until the record was published but I guess it was worth the wait.

You still keep the technical levels high  but do  you express it differently than companions in style ? You are going against the current  bands, which are trying to cram their songs with  a lot of rhythmic changes, notes and all in a dizzing pace. You make an Impression that you no longer need to convince anyone about your abilities and you are more focused on composition, moods and you are trying to express more by lowering the amount of means of expression. Are my feelings correct? If not, set the record straight, please.

Precisely! Technicality and brutality just for the sake of it was never our style, let alone now that we have musically and personally grown as a band. Of course we will never let go of our technical spices, its a part of our music sound. However, we now use them wisely and when the song asks for it. We want to create powerful tracks that haunt your mind more than they squeeze your brain. I really believe in “Overflow” we have found the golden trade-off between all the aspects we like to musically deliver and we have re-defined our sound.

Work of central couple (Geore Antipatis and Ilias Daras) for SICKENING HORROR is specific and characteristic from the very beggining.  Is it easy to identify  your band pursuant to this duo. Do you have any musical education or are you self-taught?

All the members of the band have received musical education at their childhood. I have studied classical music and piano as a kid, before I turned later into jazz. I am self-taught bassist though.  When I started listening to rock/metal music as a teenager, I was intrigued by the bass work of Cliff Burton (I still am a great Metallica fan!). He was the reason to buy my first bass guitar!

What about musical expression -Do you have  some goals which you want to achieve? Can we expect a significant shift or your current face caught on "Overflow" is exactly what you've always wanted to achieve?

It is always like this: We are really satisfied with our sound; this record sounds very close to the sound we want as a band for the time being! I am not sure what will happen when we start working for the next album. We really like experimenting and expanding our artistic borders.

I think there is no debate that this album has the best sound in your legacy.Did  You go to the studio with the intention to create exactly the sound that fit your music or  have you  reached him by progressively looking up at the studio?

We usually work a lot before entering a studio to record an album. This time we did some extra work by doing pre-production recordings to understand better the sound that fitted to the music. However, the songs did not change much through this process. They were enriched by ideas, but the main theme was fixed before entering the studio.

While the sound and music deserves thumb up , cover and design of whole CD seems to me a little bit "sloppy“, ...sorry. Is the cover art exactly what you wanted and does it meet your needs or has the resulting graphic design been affected due the funds which was released by the label.

Haha, its ok you don’t like it. The layout is exactly they way we have envisaged it; a great maze with repeating fractal patterns that leads into an overflow of emotions. Our good friend Dimitris Tsountaros managed to grasp our idea and turn it in a pretty awesome artwork.

How many copies of albums for "Overflow“ was released and do you  have any idea about the sale of your previous titles?

Novelty is generally supported by live performance. What about your band and gigs? I wonder – have you ever played in Czech Republic?  Do you know some Czech bands?

Our first show outside of Greece, on our first tour was on Czech Republic in Prague at Rock cafe If I am not mistaken! Live performance in an integral part of the band and we enjoy playing live as hell!

I have to ask for the promotion of everything about SICKENING HORROR. It is not a problem to get CD of "Overflow“ but despite this fact, it seems to me that you are not too much obscure , if you understand what I mean . What about your internet pages? Official pages (www.sickeninghorror.net) which are mentioned in your booklet are not working at all and other pages look like they are not-upgraded“. Are these things important to you?

Actually you are right that the promotion of  “Overflow” is rather poor, but we have the smallest part of responsibility for this.  From our part we do our best, but the truth is that we also have normal jobs that take a lot of our energy. When it comes to the band our priority was always to deliver unique music and not sell a band-image. We have always been down-to-earth as a band and stuck to the things that matter.

My opinion is that your band has been one of the best in the long term and my subconscious  about underestimating SICKENING HORROR is associated with this.... So I ask: What have been your ambitions when you founded your band? Have you reached them? And what are the current ones?

We always wanted to create something unique. Not to sound like anybody else. Exploration of the self through musical exploration could be our motto. We also wanted to do tours and spread our music to all the people out there. We have succeeded in both of them. Currently we want to create another album that will be a step in a new territory in the mind’s abyss.

Relatively specific are your lyrics. Why these themes?

The themes this time deal with the repetition of patterns and loops and the struggle to find the loophole to escape all this. To shut the system down. It also has to do with self exploration as we said before.

I will not ask about currently livelihood in Greece, which is probably being asked by everyone … So I will ask in another way –  do you think that  the evolution and fate of SICKENING HORROR would have been different  if you lived in some other country?

The only thing that could have been different is the touring options. Other than that, we had to put the same effort and dedication to the band as fellow musicians in other countries.

The penultimate question: Do you have any new songs? Will we have to wait for the next album again for another six years?

Well, hopefully not six years but quite some time, yes. There are some ideas, but not full songs. We still wait to get the feel of the direction that will lead us to fully engage in composition of new songs.

Thank you very much for devoting your time for the  responses and if I have forgotten to mention something and you want to mention it, here is your space.

That’s all by us too! Thanks for the interesting question, cheers! 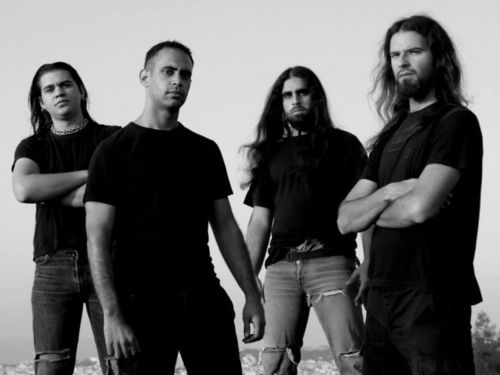