1. Hi Shatraug! According to the ?promo? materials the name of your band is inspired by the name of a certain ghost living in a coffin.Could you near to us the fate of this ghost and an apparition of SARGEIST on the scene?

The name was inspired after an old black metal legend from Rotting Christ... "The old coffin spirit"... The entity we gave birth as Sargeist lives to hate everything that breathes... it envies the living and loves the dead...

2. Would you explain to us an expression ?Ruins Of Cachtice? which you used when the band was beginning? Did I understand well that it means the ruins of the Cachtice castle where Elizabeth Bathory worked on her neverending youth? If yes, why did this theme attract you?

Yes, you are correct. The bloody history of Bathory is profound in it´s cruelty and terror... this is the same spirit that black metal embraces. We wanted to glorify the evil that has lived through centuries and therefor named our dungeon after the memoery of Countess... in case you have not heard our song "Rebirth of a cursed existence" from the Jatkosota compilation, find it. That song has the darkest tribute to Bathory.

3. Is the book by Jožo Nižnánský ?Cachtická paní? (?The Cachtice lady?) available in Finland? Or have you read any other book about this bloody lady? I have just been reading the book by Andrasz Bartholdy ?The new fragments of historical horror? which describes life of this countess and even if it is a historical novel it is a real horror!

Hmm, I do not know about it´s availibility at all. I have never heard of this... I would like to find this in English for sure. I have once read a book about Vlad Tepes that was very interesting... but someone stole it from the bookstore before I got my hands on it. Now it´s impossible to find... there doesn´t exist any copies in Finnish libraries either.

4. What led you to establish your own musical band? I think you have also any other musical activities ... what is SARGEIST different in? What does existence of this demon mean for you?

I have some kind of an unexplainable hunger to create art to praise the Lord... almost an obsession... perhaps I am possessed, I do not know this for sure, but I feel like His energy is passing through me durign this lifetime. Sargeist is the closest essence that we use to recite satanic prayers and black magick...

5. After some time Torog joined you. Could you introduce him closer to us?

Actually, both Torog and Horns have joined this horde. They are both from one of the greatest Finnish black metal bands Behexen. I have known them for years personally and the circumstances lead us to join forces for Him.

6. Would you tell us something about recording of the casette album ?Tyranny Returns?? Are you satisfied with this material in this time? And differences between new songs and old tape?

Yes, the material itself is satisfactory. The members at that time though... are not. They both turned out traitors and the drummer I had back then is now a fucking communist... I have no contact with those losers anymore. May they rot in heaven. "Tyranny Returns" will most likely be re-released on CD sometime this year... Our songs are timeless, we have no urge to develop or progress...

7. How did you establish contacts and cooperation with an american Moribund company? I think it is a good step. I also have very good experience with this company. Are you satisfied with Moribund? Do you personally know anybody from leadership of the company, haha?

The union with Moribund became as simple as by sending them "Tyranny Returns" for a listen and talking a few times about spiritual convictions. They seem to be the best label to support Sargeist there could be, both mentally and financially. This is what we appreciate most in them. They are reliable, fairly fast and honest. I don´t know if I can say if I know the leaders "personally" but I´d say I would if we met.

8. Before you made your long play CD a ?split CD? with a french horde MERRIMACK was got out. What is your opinion on this project and what do you think about your french colleagues?

This was a good chance to support another satanic group and leave a message to all the followers that we are here... before we begun to rape their souls with a full lenght.

9. I like the clasical black and white artwork of the album. You really look like a ghost from the other world. You hold a skull in your hands ... does a human skull have any meaning for you as a symbol? It must be weird to look into those empty eyes in the Hamlet´s role and say that clasical question ?to be or not to be? ...

Well, Hamlet or not... I don´t like that idea... Every worshipper needs something of the dead to channel their forces in prayers and rituals. No further explanation needed, I suppose.

10. The new album is called ?Satanic Black Devotion? ... what is your opinion on satanism? Are you influenced by LaVey´s conception of it? What do you think about effort to organize religion ... whatever religion? Are you a member of any organization or church or do you consider satanism or any other religion to be purely personal matter of each person?

We are all satanists in Sargeist. We believe in Iron Will and disciple, in the driving force within our souls guideed by the black falme of Satan. Every occult church, group, religion, sect etc... have some great views but personally I deem more in the vein of Thelema. I am not sure what the other members hold highest in their interest. There are not merely personal matters, there is only one dark being behind our minds.

11. When ?Intro? starts I was easily able to imagine those beasts from the other world howling from their graves. I love horrors with this theme so SARGEIST is exactly according to my taste. Do you like film or book horrors? And what ones?

Yes, I do. I am most into old Vampire movies but also anything that has biblical or occult sense... but too much to mention here... I´m not too much into literatural horror though.

12. Anyway, from musical point of view it is a real genuine black metal hurricane! An important element of black metal is still an expressive melody ... certainly an important thing how to evoke an atmosphere. Very helping is also corresponding sound from the Boneyard studio. Are you still satisfied with sound after the time?

The sound is in the right vein but we are still searching a little bit... we will not do anything cleaner or more accessible for sure, black metal must be dirty, cold, hypnotic and raw...

13. What do you think about bands that bring different elements to black metal? What does this musical style personally mean for you? Do you accept even bands using keyboards, female vocals or any other instruments which are not just typical for black metal e.g. your native ...AND OCEANS? Do you find a problem in existence of so called ?true? and ?untrue? black metal bands? What does your collection of music look like? What are your favourite bands and albums?

Some of my favourite bands and albums are actually all apart from Black metal... bands like old Helloween, Iron Maiden, Blind Guardian, Gamma Ray, King Diamond/Mercyful Fate... etc... but from black metal those bands are all the time changing a bit but old Emperor, Burzum, Mayhem, Beherit, Impaled Nazarene.. they rule forever. From today´s bands I like the French and German scenes... too many bands to mention... But yes, I can accept any instruments and elements in black metal as long as it´s beneficial for the black metal sound and atmosphere... many fail in this miserably.

14. In ?Frowning, Existing? is used a little bit hysteric voice ... is it connected with lyrics or mood of this song? There is a star-sign on promo CD as a reference to any other note or addition but I haven´t found any. Could you explain to us please?

The star tells that the lyrics on this song were written by members from the band Woods Of Infinity and the vocals are performed by Shatraug on this song only... the rest of the album is howled by Torog. I chose to perform that vocal since it was msot natural for me as I had asked the WoI guys to write that...

15. By and large could you near the texts of single songs in detail? They seem to be really stylish that´s how it should work in my opinion ... black metal ... a devil, cemetery, evil, dark, frost ... or not:o)?

Well, the lyrics are available to everyone who will get the album... I will not dulge deeper into their meaning at this hour, it would take far too long and I´m honestly said too tired.

16. While some stylishly orthodox albums begin to be boring by the time, the songs on ?Satanic Black Devotion? tends to be better and better. Strong melodies, rythm forces to move. Do you need any specific atmosphere when composing melodies for SARGEIST or are you able just to sit down with a quitar in sunny midday and create:o)?

Not really. It can easily be a sunny afternoon as well the middle of the night. I just have to be awake enough to receive the inspiration where ever it comes from... I can´t even begin to explain it, I just have to be aware of it and take advantage of Satan trying to howl through my soul...

17. I was surprised by the motive of ?Sargeist? song ... one of those melodies seems to me to be strongly influenced by scandinavic folklore. It´s so catching my fancy and provoking to morbid dance. Is it just my feeling? It really seems to me that the motive of refrain slightly deviates from the conception of the album. And I mean it I really like it! Maybe you won´t believe but you made me dancing by this matter, haha! What do you think about bands mixing a scandinavic folklore with black metal?

This song is intended to reflect the memory flashes this coffin spirit receives from the darkness of his soul... a flash from the past with some forgotten joy he still remembers but only with hatred burning in his eyes...

18. I like the best the last song ?Returning To Misery and Comfort?. Listening to it I feel anger, urgency, any injury, resolve ... it gives me power. Do you consider to hand over this energy to your fans live? Play SARGEIST any concerts? It may not be possible in two ... how do you solve it?

We are not planning live shows. There might be some in the future but it´s not a question at this moment.

19. What´s in your opinion the best black metal album of all time?

Darkthrone "Under a funeral moon"

20. If only black fire never put out in our hearts ... thank you for your time ... I wish the coffin ghost SARGEIST wander through the underground caves long long times ... you have the last say!

Watch our for the next desecrations from Sargeist... split 7"EP with Temple Of Baal and a split LP with Horned Almighty... you may ask them from Grievantee Productions, they will only release the 7"EP though... The split LP will be out on Hearse prod... 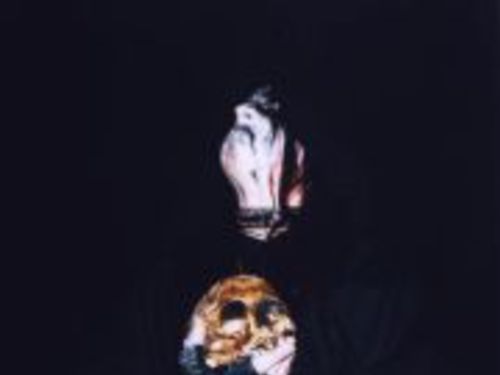 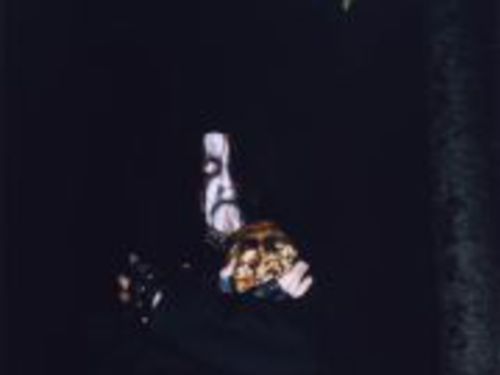