The band was founded by Pozza in 2003. The name Death Mechanism is a kind of metaphor of humanity... It describes the most cynic and apathic side of the society.

Me and Manu are also members of the italian cult band  Bulldozer… so… we had the opportyunity for play around the Europe and in the North & South American in this last years with some importants bands and in the very important festivals.
Ivan play also in the another death metal band called Nyarlathotep.

Our last record „Twenty-First Century“ was recorded in the 2012 at the New Sound studio in Zurich, Switzerland. It's the studio of Tommy Vetterli from Coroner, he worked as the producer and also as the special guest... he recorded a guitar solo into the last song of the album. The album was released by the italian label Scarlet records.
Maybe in this album some songs are a little bit different from the first works… but we don't want limitations, we play always what we feel in that moment!

The lyrics are all in English... because it is the only way to propose our music outside Italian borders...
Let's talk about reality... progress, technology, society, diplomacy, conflict, pollution… all into the most cinyc and objectivy way… i think that the lyrics are very imporant for the music of the Death Mechanism.

We don't have an exsclusive artist for our artwork… the last was made by a girl, a friend, envolved into the dark/new wave music scene.
I think that the artwork is very important... should be the graphic rapresentation of the music!

We are very influenced from the extreme metal scene of the first 90'.
From many thrash metal band, but also from the early death metal bands
But our primary inluences are from two bands! Sadus and Coroner… speed and violence from the first and for a dark feeling from the second!

Well... i think is a very „difficult world“...  too many promisis, too many lies too many bussiness, too many costs… and very few facts!! Exspecially int the underground scene...! I think is better someone realy interested to your music also is a little label that a someone intersted to your money!
We never had particular problems with our labels... at the present we don't have any kind of deal with any labels… we'll search when the new album will complete!

I do not know exactly... I've been active since 1997 with my first bands... since 2003 with Death Mechanism and since 2011 also with Bulldozer... so... I can say „many“!
Well... with Bulldozer we played in many important festivals on very large stages and with thousands of spectators.
With Death Mechanism we had the opportunity to play with some important bands in Italy and also abroad... if a must talk about the most importants, for me, I say thw gigs with Sadus and with Coroner!

Play for myself… for my satisfaction and for fun... always with commitment and seriousness. These are the most important motivations for me... The first satisfaction for me is to record an album... because you can hear your ideas becomes concrete... through music... and also because the record and the music remain forever in time, if it is a good job, it will be a good work forever! It does not matter celebrity or success but that's a good work!

We are working for the new album… we hope complete it before the end of this year...
Ok… we are very happy for come back in the Czech republic.
Thanks for the interview… see you at the ETEF 2018! 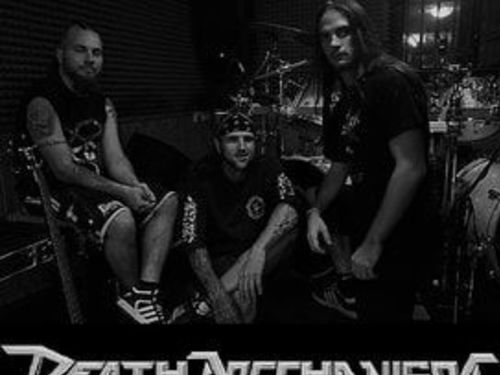