VANHELGA – If you only have happiness, existence will quickly become meaningless. 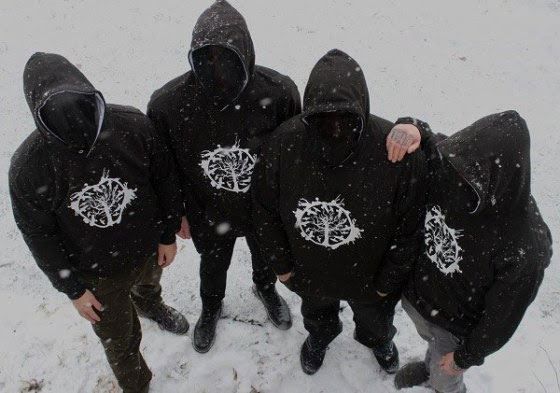 Hi, you have finished recording of the new album "Fredagsmys", which comes out on June 27th. Was it hard work or did you enjoy the recording?

Hello. We mostly enjoyed it. At some point there was some technical issues in the studio and it has been a work in progress for a very long time. It’s important for us that the creation of our art comes from the “spiritual” aspects of existence which has to take the time it needs - otherwise the results will not be as we want them.

Your music is nothing positive. Is composing some sort of therapy for you? Way to evade negative thoughts from yourself?

We never want to evade negative thoughts. We want to embrace them with open arms and see where they take us. For us our music and everything behind it really is positive. The meaning behind the word positive is subjective. In some cultures death is something to be celebrated and viewed upon as a very positive thing while in other cultures it is definitely not viewed as positive. What I am trying to say is that there exists no such thing as positive or negative, it is up to YOU to decide what is positive or negative in your own existence.

In some aspects composing and being creative is indeed like therapy and we can see positive benefits from negativity. Sometimes we like to say that “without negativity there can be nothing positive”.

However, back to "Fredagsmys". Can you describe the concept of the album? His lyrical themes?

As with everything we do the meaning is cryptic. Everyone should find their own meaning in it. But for me personally: “Fredagsmys” is a very popular and known term in Sweden. It means staying in with friends or family, watching TV and having snacks on Fridays. Literally “Friday cousy time”. We really hate this because it’s pathetic and pointless on so many levels. People in Sweden are working everyday with something they really don’t want to do and the only thing they look forward to is “Fredagsmys” every Friday. They are not really alive, they are just like slaves to existence and obeying what others tell them their whole life.

So our album is a kind of sarcastic approach to this whole thing. It’s also a way to send a message that life is different for everyone. For some people “Fredagsmys” consists of shooting heroin in the streets. It’s a lot about contrasts and forcing alternative ways to perceive existence.

I sometimes hear a "positive" melodies on the album. So is there also hope hidden?

For me personally the music is about contrasts as well. Using really sharp contrasts as a tool while being creative is more or less one of the things that makes Vanhelga unique. A sort of schizophrenic alteration between pitch black hopelessness and strong euphoria. Experiencing the whole range of emotions.

On the track "Keep the Windows Closed" is Graf from PSYCHONAUT 4 as a guest. Why did you choose him?

I always had a vision for that song regarding the vocals and the singing style of Graf was what I was looking for. We have worked together with Psychonaut 4 before, we did a split (urban negativism) together and we toured Russia and Belarus not that long ago, so it came natural to ask him if he wanted to participate on the album. He also wrote the lyrics to the song.

How is it with the song called „Relationship in Pieces? Is the text inspired by your own experience?

Yes. The message of the song is, like with everything we do, supposed to be cryptic (meaning that it means different things depending on who is listening). But for me the inspiration of the song is a psychiatric diagnosis called “Schizoid Personality Disorder”. I don’t want to reveal more about it but I encourage you to look it up yourself.

You call yourself "positive music for positive people". Is this just a joke, or has this sentence deeper meaning?

It’s a certain type of bitter sarcasm that comes from decades of being depressed. The meaning is of course the total opposite. Also it is a way for us to try and open peoples eyes. Having them to question “What is really the meaning of positive?” and ultimately “does it really exist or is it just a human construct?”.

Negative aspects of existence, whether in literature, film or music, are always more interesting than those stories of happiness. Why is it like that?

It’s because happiness equals stagnation. If you only have happiness existence will quickly become meaningless. Negative aspects of existence is like fuel for creativity. It pushes you forward and forces you to evolve. The symbiosis of them both is very valuable for people who understands it and can harness it or use it in different ways. The fear of the unknown is something that always have fascinated people and for most people death is the ultimate symbol for the unknown. Negative aspects of existence often leads to death - even if it’s just theorized.

Do you like literature? Does it affect you in some way?

Everything affect me in some way even if I like it or not. That is just life, you have to accept that everything is connected in fucked up ways that you don’t enjoy. Since I was a child I have always been interested in philosophy and the unknown. I have studied it and read countless books about it. The most important lesson I learned is that I know nothing about anything and that life is not to be taken seriously. Literature is interesting but I believe music has more potential.

On 29 June, you're baptizing a new album in Prague. Its a surprise, cause you are Swedes. Are you interested in Prague so much? Why?

We stayed and performed in Prague for a couple of days last year. We really enjoyed it and have contact with a great organizer and bar owner who lives there. Therefor it felt natural to have it there. In Sweden there is no point in having concerts because the people here mostly want to be at home which means that nobody will come to your show. It’s basically a waste of time. Even bigger names (bands) barely have any visitors compared with how the scene is at other places around the world.

What exactly are you planning? How will the show look like?

It will be one hell of a show. The idea is to listen to the new album for the first time together with our fans. Get wasted with them, talk, answer questions, maybe do some interviews. Later in the evening perform our best show yet and have some more drinking with fans afterwards. A lot of new merchandise will be available at discounted prices and we will spend some time signing stuff as well.

After the show, afterparty takes place in "U Suché dasně" pub. I heard, that last time you have been drinking a lot there, haha. So i hope it will be the same again!

Thanks, we hope so too. That is correct. Especially our drummer and guitarist got totally fucked up last time. We had to carry their sorry asses to the hostel and they vomited and pissed themselves on the hostel room floor. Good times. Also some shady fucked up stuff happened but I will not go into details.

Thank you for the interview. Tha last words are yours..

Big thanks to our fans, remember to embrace negativity with open arms and stay positive while doing it. 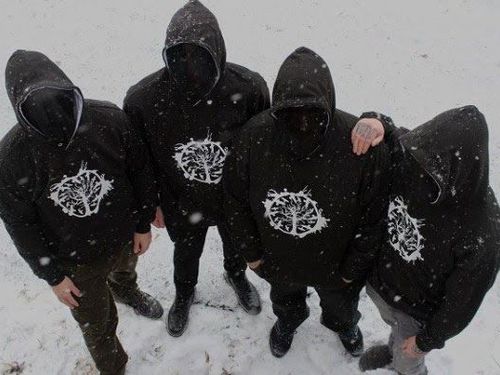